Following Margherita Taylor’s visit to the Waste House in December last year, we are happy to announce that Waste House will be featured in the upcoming episode of Countryfile Diaries airing tomorrow at 9:15 on BBC One. The Waste House segment focuses on how recycled, repurposed and bio materials in built environment could potentially help tackling UK’s housing and landfill crisis. Countryfile Diaries will also be looking at progress on the live research happening at Waste House in partnership with Local Works Studio.

The ‘Waste to Wealth’ summit was held in London today, bringing together over 200 leaders including the Prince of Wales and the Environment Secretary Michael Gove along with members of government, businesses, volunteers and university groups from all over the country. The summit targeted reducing avoidable waste by 2030 and to double the nation’s resource productivity.

According to BBC News One of the most remarkable events of the summit was a speech given by Prince Charles in which he stated:”Making goods (like polyester duvets) uses energy and releases greenhouses gases – and the Prince and the politician both say we can’t tackle climate change unless we use materials more intelligently.”

The University of Brighton’s Waste House, built from waste material and using innovative waste materials as insulation has been further acknowledged in the article.

“The Waste House is almost entirely made from thrown away materials most of which were heading for landfill or incineration. Materials used in the construction include toothbrushes, denim jeans, dvd cases, floppy discs, carpet tiles and construction waste. These materials have now been joined by used duvets from The University of Brighton’s halls of residence which are being used as insulation. Whilst oyster shells from the critically acclaimed English’s oyster bar have been mixed with waste aggregates from a neighbouring building site (Preston Barracks) to form wall tiles.”

On the subject of managing resources and reducing avoidable waste, Duncan Baker-Brown – Director of BBM and the project architect of the Waste House, told BBC News: “You pay 20% VAT to refurbish a building, but zero VAT to demolish and rebuild. There is a tax incentive to knock buildings down, which is frankly insane.”

The full article can be found here. 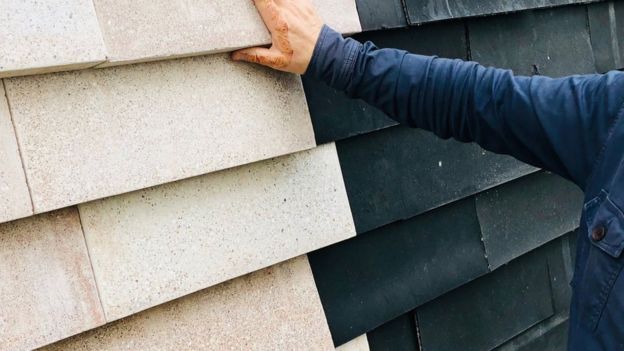 A revamp for The University of Brighton’s Waste House

The Waste House is almost entirely made from thrown away materials most of which were heading for landfill or incineration. Materials used in the construction include toothbrushes, denim jeans, dvd cases, floppy discs, carpet tiles and construction waste. These materials have now been joined by used duvets from The University of Brighton’s halls of residence which are being used as insulation. Whilst oyster shells from the critically acclaimed English’s oyster bar have been mixed with waste aggregates from a neighbouring building site (Preston Barracks) to form wall tiles.

“It is great to see the Waste House continuing to break new ground four years after it was first completed. Duvets and oyster shells are not currently widely recycled yet, like so many of the other materials we have used, are perfectly suited to alternative uses. We will now be testing how they perform so that we can demonstrate to others the huge potential.”

The world is their oyster

The partners at Sustainable Bio & Waste Resources for Construction (SB&WRC) research project have continued to make significant progress towards the design and manufacture of the first insulation prototypes made from biobased and recycled materials. The University of Brighton is one of the English partners of the SB&WRC project. Their deep involvement in alternative building technologies has led to impressive experiments and results that continue to inspire researchers and practitioners.

The project is supported by the INTERREG VA France (Channel) England programme and receives financial support from the European Regional Development Fund (ERDF).

Over 7 million tonnes of mollusc shells are discarded by the seafood industry every year. These shells consist of over 90% calcium carbonate. Crushed shells can reduce soil acidity in agriculture or be fed to egg-laying hens as a calcium supplement. However calcium carbonate is also a common ingredient in the production of cement that is one of the largest sources of harmful CO2 emissions. Currently the majority of the cement industry’s calcium carbonate is coming from ecologically harmful and unsustainable limestone mining.

One of the projects has the University of Brighton team partnering with restaurants recycling oyster shells into beautiful tiles suitable to hang on the outside of buildings. One restaurant, ‘English’s of Brighton’, who throw away over 50,000 oyster shells annually, have donated shells to the project. Local Works Studio fire some shells to 900°C to create ‘quick lime’ and mix it with unfired crushed oyster shells forming an aggregate. Pressing the mixture into silicone castes there is a natural chemical reaction when water is added to the mix creating some heat. This hydraulic reaction is similar to concrete ‘curing’. After about 3 weeks the tiles are hard enough to hang on a building. Ben from Local Works states that “We’re working on 50kg of oyster per m2 of hung tile. Traditional clay tiles are 78kg/m2.” So not only we are working with waste material, but the manufacturing process is more efficient that the current system.

To read the full article click here.
Further details on the projects earlier research can be found here.